On Top Of The World…

Portland has an exciting new Eastside hotel with an amazing rooftop restaurant. Hotel Eastlund, a 168-room boutique hotel located across from the Oregon Convention Center and within blocks of the Moda Center, recently opened after a $15 million remodel.

The light and airy public spaces of the hotel feature floor-to-ceiling windows, an upscale take on mid-century modern décor with pops of color and original art accenting the lobby and hallways. The hotel offers both meeting and event space.

The rooms, many with stunning city views, are upscale, comfortable and continue the mid-century modern theme focusing on art and use of vibrant spots of color. The spacious bathrooms are beautifully tiled, some with baths and some with bath and large walk in shower.

The new hotel features two restaurants operated by chef-restaurateur David Machado; the rooftop Altabira City Tavern and the ground-level Citizen Baker. The real draw for Hotel Eastlund is the rooftop bar, restaurant and out-door patio. The views from this lofty vantage point are amazing. Altamira City Tavern takes full advantage of the beauty of the Portland skyline. I enjoyed sitting at a window table looking out over the glass towers of the Portland Convention Center. Spectacular city views are one of the features that makes Hotel Eastlund special. 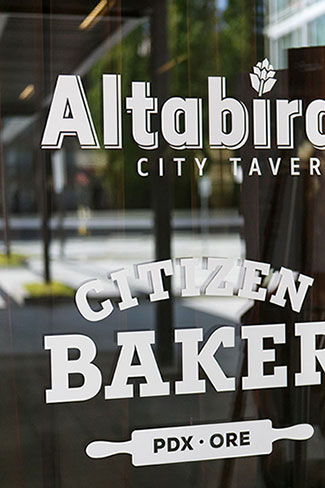 When I visited, the restaurant was not yet open, but I hear the fare will be upscale American with an emphasis on locally-sourced ingredients. The 16 varieties of beer on tap will include local beer, mostly from close-by craft breweries. Also look for Pacific Northwest wines and locally distilled spirits.

Citizen Baker, just off the lobby is not to be by-passed. They will have artisan breads, soups, sandwiches and pastries. What they had on display looked enticing. In the evening, the area will transform into a wine bar, an excellent social space. The hotel’s open, light-filled lobby offers a comfortable area to relax or work, with 24-hour access to the hotel’s business center and fast internet service that is available throughout Hotel Eastlund.

Hotel Eastlund offers easy access to all that Portland has to offer as well as providing yet another exciting dining and cocktail hour opportunity for locals and guests alike. If you fly in, you can take the light rail to the hotel and to get around Portland. No car needed!