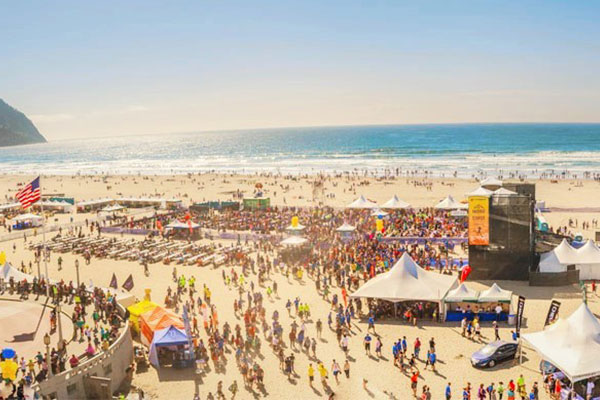 The Hood to Coast is the world’s largest running relay race, stretching 200 miles from the top of Mount Hood to the Pacific Ocean in Seaside. The overnight event culminates in the West Coast’s largest beach party and draws more than 12,000 runners and walkers annually. The race fills up months in advance, but there’s no charge to watch the dedicated and costumed runners make their way down the mountain and onto the beach.

Race founder, Bob Foote, needed a new challenge. As a 35 time marathoner and 13 time ultra-marathon runner, Bob and his running friends were looking to test themselves in a fresh new challenge. That’s when Bob’s creative mind starting churning and came up with the idea of running from nearby Mount Hood, the backdrop for the City of Portland in which he lived, to another favorite weekend get-away…the beach! A group of Bob’s running friends and competitors would form relay teams, handing off every 5 miles, starting at Timberline Lodge on Mount Hood and finishing in the quaint coastal town of Pacific City. As a dedicated runner, Bob knew it was something he and his fellow running enthusiasts would enjoy as a challenging, unique, and truly memorable experience!

The first Hood To Coast Relay took place, August 7, 1982 on a full moon, with 8 teams of 10 runners. Bob made simple spray paint marks on the road to indicate exact exchange points, (being a perfectionist architect, this meant exactly every 5 miles). This translated to one exchange point being in the middle of a very busy intersection in Portland!

Word got out of the adventurous Hood To Coast Relay, and the race began to take on a life of its own. As HTC grew each year, it necessitated safer exchange points with more ample parking, resulting in varying leg lengths that continue today. In 1989, the event outgrew capacity for the town of Pacific City

and moved to the beachside community of Seaside, Oregon. The distance of the event then increased to 199 miles, with teams growing in size to 12 members, in order to accommodate the extra mileage.

The Hood To Coast Relay has filled its team limit for the last 26 years, and on “Opening Day” for the last 19 years!

In 2006, Felicia Hubber, Bob’s daughter and a long-time runner, came on-board the Hood To Coast organization as President, taking on many of the responsibilities for the event. Felicia has participated in the race six times, and attended or assisted in the race 33 of the last 36 years. Thus the Hood To Coast tradition as the “Mother of All Relays” looks to continue for many years to come!

Trying to decide what to do in Portland? Check out events like this one, just a short distance from our Portland boutique hotel. A stay at Hotel Eastlund means you’ll be across the street from the Oregon Convention Center, next to the Moda Center and close to the best destinations, restaurants and attractions Portland has to offer. Whether you’re here for business, pleasure, or looking for hotel specials in Portland, we look forward to helping you discover this beautiful city.